IntroductionWeight management for athletes is unique due their high energy expenditure and preference to preserve muscle tissue. Therefore, caloric restriction is necessary but can not be too severe as this can negatively affect both cognitive skills and physical performance [1]. Weight loss strategies can be divided into two main categories;
--Rapid weight loss, which is based on fluid loss and/or energy restriction in a brief period (12-96 hours). In combat sports this is often done by restriction of fluids and food consumption, exercise in “sweat-suits”, use of laxatives/diuretics and sauna [2].

-- 2.Gradual weight loss, which is based on lowering weight through loss of fat mass over a prolonged period (>1 week) by facilitating a negative energy balance either by increasing energy expenditure or decreasing energy intake [3].

This article will specialize in weight reduction for athletes competing in weight classes in combat sports.How is practice today?Practice today varies within the different sports, but one thing in common is that the majority of weight-class athletes lose weight prior to competition. Combat sports are divided into weight classes, and represent approximately 25% of the Olympic medals [4]. Cutting weight is common to compete in a lower weight class to gain physical advantages like longer reach and more lean body mass. This might seem paradoxical as especially rapid weight loss causes impairments to the aerobic performance mainly attributed to dehydration, decreased plasma volume, increased HR, impaired thermoregulation, glycogen depletion and hydroelectronic disturbances [4].

It may also impair cognitive functions, however a study done in Sweden [5] also suggests that weight reduction can contribute to a mental advantage relative to one’s opponent and can serve as a coping mechanism for increased focus and commitment.

Barley et al [6] reviewed 637 competitors in different branches of combat sports, and found that manipulation of body mass was done by all athletes. There were differences in the strategy to lose bodyweight like skipping meals, fluid restriction, sauna and training in elevated temperature. General findings suggest a higher prevalence of acute weight loss in MMA compared to other combat sports.As elite athletes in general have low body fat percentage [7], reduction in fat mass may be more difficult than for an average person. They also have large energy demands due to high training volume and intensities, which elevates appetite regulating hormones. This can make following a restricted diet mentally difficult. 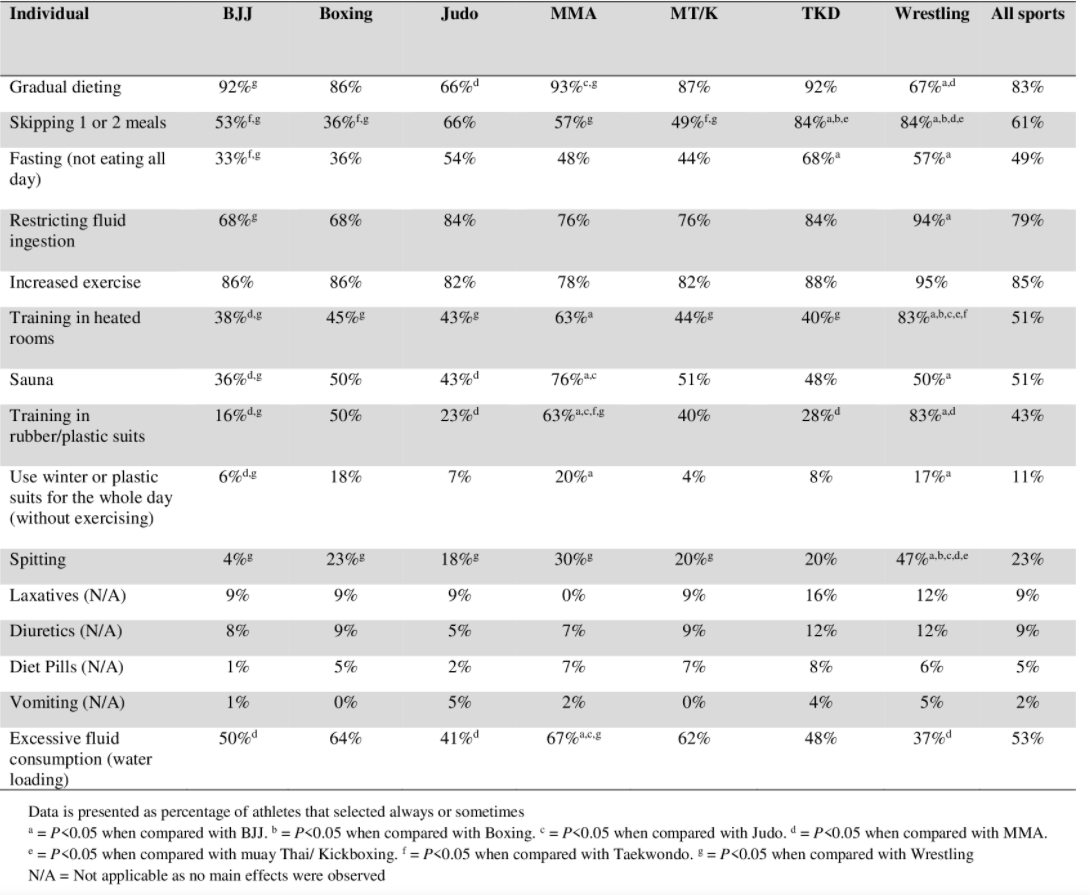 Is there an optimal approach taking both health and performance into consideration?Utilizing both rapid and gradual weight loss strategies appears to be beneficial to avoid severe dehydration which impairs physical performance. For gradual weight loss the most essential component is the ratio between energy consumption and expenditure.The best way to go about this part of the weightloss process is to assess the athletes total daily expenditure, and maintain a deficit using a dynamic model like the one developed at the National Institutes of Health [8].Measuring body fat percentage is important to avoid negative health impacts, the lower limit being 10-12% [9] and healthy range 20-32% [10] for females and 5 % and 10-20 % being the lower limit and health range for males, respectively.Rapid weight loss is common for combat sports athletes, and around 95% of athletes showed signs of hypohydration with weigh-in the morning of competition [11], and a 2% reduction in BW will take at least 6 hours to rehydrate with a high sodium concentration [12]. We will therefore argue that the fluid restriction should only be mild, avoiding extreme fluid loss through water loading and passive sweating (hot environment). Solely relying on losing weight by dropping water weight is therefore not optimal, and adding in two new components may have a better impact on performance:

⏩Glycogen stores are not likely to be a limiting factor with activities in shorter durations and have not been found to be a limiting factor in combat sports when the athletes can consume carbohydrate between bouts [13]. 4 hours of refueling was adequate for judo-related performance [14]. In practical terms lowering the intake of carbohydrate around 3-5 days pre- competition will cause loss of water weight in liver and muscles as glycogen binds water with a 1:3 ratio. Severe depletion or adding extra workouts should be avoided.⏩ Manipulating the intestinal content by switching to low fiber and high-density diet approximately 72-96 hours before weight-in will also aid in weight reduction without affecting the physical performance.If these three methods are combined and not done in an extreme fashion, it is less likely to negatively impact health and performance if the refueling/rehydration is done correctly. The athlete should consume 1.5x the fluid loss the following hours after weight-in, containing 100 mmol sodium per liter water [12]. Water alone will further decrease plasma sodium concentration and thus osmolality, which may reduce thirst and increase urine output and thus delaying the rehydration process. Carbohydrates should also be consumed immediately, both in the form of liquid and solid food. In summary all weight loss protocols for combat sports before competition should be carefully designed and assessed as any rapid reduction below 2 % of bodyweight will impair the athletes physical and cognitive performance. Utilizing strategies for both gradual and rapid weight loss appears to be optimal for this purpose, and furthermore adding controlled glycogen depletion and manipulation of intestinal content  towards competition may be beneficial.